"A WORK OF FRICKIN' GENIUS OR THEREABOUTS"
- Rev. Norb, RAZORCAKE

A digitally enhanced cat snatched Matt's muse.
Now he's looking for it in all the wrong places... 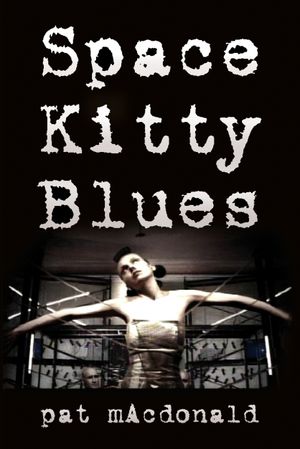 Part allegory, part paean to The Vinyl Record, part autobiographical fiction, part autopsy, this first novel by musician/songwriter pat mAcdonald dissects a song in search of truth or something better. Playful soul searching and social commentary propel this earthy examination through the back alleys and clandestine clubs of Barcelona at the turn of the millennium.

“In 1986, Bausch & Lomb offered MacDonald $150,000 for the rights to use his Top 40 hit, ‘The Future’s So Bright, I Gotta Wear Shades’ to advertise its Ray-Ban line of sunglasses. But the singer-songwriter, then fronting a band called Timbuk3, said no deal. A few years later, Clairol upped the ante to $450,000 for another of his songs, ‘Hairstyles and Attitudes.’ MacDonald turned that down, too. And last year, the artist rejected a $500,000 offer from fast-food giant McDonald’s, once again for ‘The Future’s So Bright.’ The company hinted that it might go as high as a million, but MacDonald still wouldn’t budge--even though his only permanent address is a rented motel room in Austin, Texas.” - U.S. NEWS & WORLD REPORT May 25, 1998

In the time of turntables and vinyl, Matt Packard (FutureX) had his fifteen minutes of fame. Or to be more precise, ten minutes plus an encore of public humiliation...

Here is the fictitious 80s Hit* upon which the book's story is based, from protagonist Matt Packard's defunct band, FutureX.

“Space Kitty Blues (FutureX) peaked at #13 on the Billboard charts ... due to its infectious beat, and despite social significance that no one but the band apparently got (something about Star Wars and the Trickle Down

Here is the fictitious 80s Hit* upon which the book's story is based, from protagonist Matt Packard's defunct band, FutureX.

“Space Kitty Blues (FutureX) peaked at #13 on the Billboard charts ... due to its infectious beat, and despite social significance that no one but the band apparently got (something about Star Wars and the Trickle Down theory), its “Get it down” refrain became a rallying cry at frat parties nationwide. The song's subsequent use in a well-known cat food commercial furthered its notoriety..." (SKB, Chapter 3)

*This retro remix of the original from pat's 1999 LP release "Begging Her Graces" (produced by John Parish) is also available on a vinyl 10" in our store, along with Purgatory Hill's version - plus 2 more Invisible Pistols album cuts.

"A film director friend, Hector Morgan... asked us to act in a short clip he was creating to promote the 10th Barcelona Independent Film Festival, l'Alternativa 2003. The location for the shoot was an abandoned nineteenth century spa on Montserrat Mountain. Turbulent rapids ran by the place where we were shooting, and Katherine, in the early stages of recovery from cranial surgery that affected her equilibrium, stumbled down an embankment and almost fell in. Luckily she was able to grab some shrubbery and hold on until two of us pulled her to safety. That whole day of shooting I was freaked out realizing how close she’d come to falling into the rapids and being swept away. The sheer terror of that close call fueled my acting that day (along with Hector’s directive, “More weird!”) Later, watching the clip, I realized how perfectly the onscreen action matched Matt’s mental state at a certain point in Space Kitty Blues, so I obtained permission from Hector to write it into the book as a dream sequence..." (SKB, Introduction)